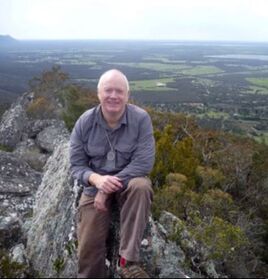 Australia’s  landscapes are really nothing like the Mediterranean or English countryside to which so many aspire. If Captain Cook had been Australian and discovered England would he have introduced kangaroos and emus as livestock? For too long, many Australians, both in the country and cities, have lived as aliens in their own land. “It might be time to redirect our dreams,” championed the late eminent environmental scientist George Seddon. “We are here and not somewhere else.”

em PRESS seeks to reveal a sense of a place, connecting people to their country. We believe small and local is beautiful, to paraphrase E.F. Schumacher: em is one of the smallest printer’s measures.

Gib Wettenhall, the principal of em PRESS Publishing, is an award-winning author, journalist and editor. He has, in particular, written a series of books on cultural landscapes and Indigenous history – two editions of The People of Budj Bim with the Gunditjmara  of south-west Victoria; The People of Gariwerd: the Grampians’ Aboriginal history, which has gone through three print runs; and William Barak: Bridge builder of the Kulin. With photographer Alison Pouliot and designer Max Marks, he published in 2006 a high quality landscape photography book on the Grampians ranges, Gariwerd: Reflecting on the Grampians. He researched and wrote the interpretive signage at the Brambuk National Park and Cultural Centre in Halls Gap. And he has written the content for the interpretive signage for the World Heritage listed Budj Bim Cultural Landscape – due for installation in the second half of 2022.

He has edited and ghost-written, then produced two Indigenous memoirs on a commission basis for Aboriginal Affairs Victoria. Gunditjmara descendant Dawn Lees undertook extensive research to uncover her family history in Daughter of Two Worlds. Gib worked with her to add missing pieces and bring the narrative together. For A Fortunate Accident, Gib undertook a series of interviews with four-times Indigenous Paralympian, Kevin Coombs, to produce a memoir faithful to his voice and story.

A member of the Ballarat Region Treegrowers executive  since its foundation in 1994, Gib in 2009 edited and published a book Recreating the Country on ways to add habitat to make ‘wildlife friendly properties’ for native fauna and flora in bare, rural landscapes. In 2010, Ballarat Region Treegrowers  established a 15 hectare biorich demonstration forest at Lal Lal  based on the land restoration principles set out in Recreating the Country – visit www.biorichplantations.com  He was for 14 years the Editor  of the national quarterly, Australian Forest Grower magazine. He has over many years edited and produced books  by farm forest researcher, Digby Race. Most recently 2016, a book, Adding Value to the Farmers' Trees,  on how a joint Indonesian and Australian team of researchers worked with smallholders in Java, Kalimantan and Sulawesi on means of improving commercial management of their trees. Now a professor at the University of the South Pacific, Digby in 2022 has commissioned Gib to help edit a follow-up book on community-based forestry research across South-East Asia to be titled Raising Trees and Livelihoods.

In 2013, em PRESS published a nature journal titled Daylesford Nature Diary by ornithologist Tanya Loos that reintroduces the Indigenous concept of six seasons for Victoria's foothill forests. That year, Gib and his wife Gayl visited north-east Arnhem Land, a bastion of Indigenous culture, where the Yolngu people's language and connection to country remains strong and dynamic. As a result of that trip, an Indigenous land management group, the Yirralka Rangers, commissioned Gib to write and produce two booklet for visitors explaining how they go about protecting their land over an area the size of Wales. The second in the series examined the link between the rangers' environmental knowledge and being on Country, and was published in April 2016.

As the president and publications manager of the Great Dividing Trail Association (GDTA), Gib produced their four map brochures and interpretive signage – visit www.gdt.org.au  In 2012, he wrote and produced an award winning walking guide for the GDTA about the 210km long Goldfields Track, which goes from Mt Buninyong  to Bendigo. A 2nd revised edition that included  mountain bike riders was published in December 2017, see Goldfields Track Walk or Ride Guide. In 2021, Gib edited and produced for the GDTA a  comprehensive guide to short circuit walks and bike rides within a 25km radius of Daylesford, Central Victorian Highlands Walk and Ride Circuits. This built on the Federation Walks 2015 booklet, edited and produced by em PRESS.

Distribution of em PRESS publications to  bookshops at wholesale price is available on request. Orders of under five books attract postage and handling costs. Melbourne distribution is handled by Sales Manager, Rob Oke.