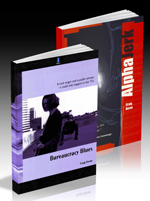 Bureaucracy Blues sets the exploits of a ‘wannabe’ rock star against the backdrop of the public service in the ‘70s. In the sequel, Alpha Jerk, the dream turns sour, curdled by fame, money, power, sex and too many drugs. These days author Craig Horne has metamorphosed to become a blues statesman with his own band the Hornets.

The opening novel epitomises the 1970s as  the decade of possibilities: when a young man could join the public service and then take leave without pay to play as a support band on an East Coast tour. For anyone who grew up in Melbourne in that era, this book will open memory's floodgates. Horne recreates images of Lygon St, bands at inner city pubs, the exodus to Nimbin seeking nirvana and the optimistic naivety that characterised the period.

Alpha Jerk is an altogether darker novel following the lives of the three main characters from drug rehabilitation to setting up house in inner Melbourne. They begin a journey of self-discovery experiencing along the way all the excesses of the 1980s including soap stars who want to be rock singers, techno music, corporate takeovers, property speculation, the sharemarket, cross dressing, Hells Angels and performance poetry.

"Horne gives a warm and humorous account of growing up at a time when change seemed tangible.”
– Jann Gilbert, Australian Book Review on Bureaucracy Blues

About the author
Craig Horne is lead singer of the Hornets and has graduated to become a solid blues presence on the Melbourne scene with his long-standing band featuring standout musicians like Jeff Burstin (Jo Jo Zep and the Falcons, Black Sorrows) and Gary Young and Wayne Duncan (Daddy Cool). A speechwriter in his day-time job, he most recently wrote for Victorian Police Commissioner, Ken Lay. After close on 40 years, he still lives in Fitzroy, is still married and has two boys.

He co-authored Runs Around Melbourne, wrote and produced the Radio National series The Housing Game and is to blame for introducing the world to footy rock (as heard on the Coodabeen Champions radio show).